The Week of Reading to Kids 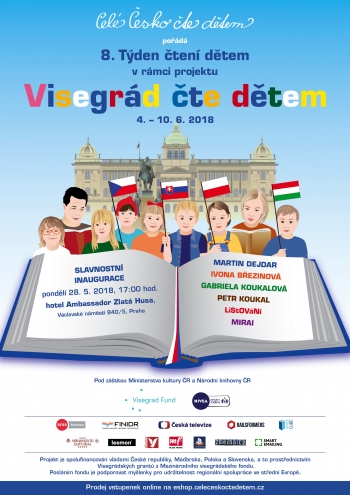 The 8th Week of Reading to Kids in Czech Republic within the Visegrad Reads to Kids project took place from the 1st to the 10th of June 2018 and it was focused on literature of authors from all four Visegrad (hereinafter V4) countries. Partners of the project were:

The aim of this international Week of Reading to Kids was to raise awareness about the importance of reading aloud amongst all four Visegrad countries.

The ceremonial Inauguration was held in Ambassador Zlatá Husa Hotel in Prague on 28th of May with the presence of delegation from all the V4 Partners´ organizations. The ceremonial was attended with more than 200 children with their parents and other visitors. The colorful programme where well known authors and famous personalities took part (actor Martin Dejdar, MIRAI music band, athletes Gabriela Koukalová and Petr Koukal, writer Ivona Březinová and actors from LiStOVáNí scenic group) was prepared.

All of the representatives had a short speech about respective national organization and the book of Czech author translated to all the V4 national languages was read by representatives in all the V4 languages. Every child got a book from Mladá Fronta and Albatros publishing houses as a gift. PHOTOGALLERY

This public event promoted the idea of reading to children and the online meeting among all the V4 countries was held during this event. All the Partners said hello to each other in their national languages. The children who were involved waved to their V4 friends in other countries.

The main partner of the 8th Week of Reading to Kids within the project Visegrad Reads To Kids was company Beiersdorf, spol. s r. o. - NIVEA

The project was co-financed by the Governments of Czechia, Hungary, Poland and Slovakia through Visegrad Grants from International Visegrad Fund. The mission of the fund is to advance ideas for sustainable regional cooperation in Central Europe.